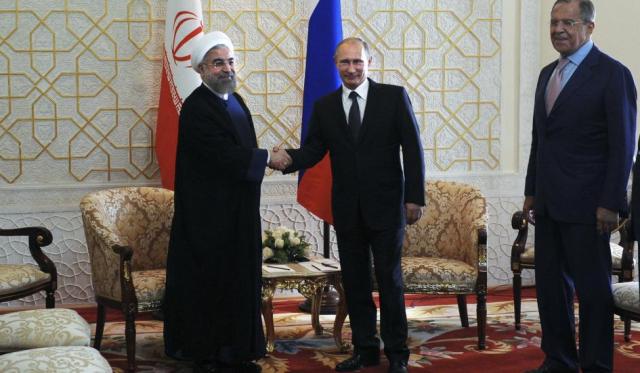 Joint support of Basher al-Assad’s regime has highlighted Moscow and Tehran’s developing political alliance. In contrast, the level of economic cooperation between the two states has historically been very modest: 2014 trade between the two countries amounted to $1.68 billion and was just 0.2% of all Russian foreign trade. Yet now that Iran’s nuclear sanctions have been lifted and Russia has lost many of its trade partners, Moscow is demonstrating a markedly increased interest in economic cooperation with Tehran.

One element driving this interest is Russia’s increasingly restricted trade options in the past few years. Putin’s 2014 military intervention in Ukraine resulted in trade restrictions between Russia and a substantial list of countries that included the European Union, the United States, Japan, Canada, Norway, and Australia. Despite the ensuing economic recession in Russia and the harmful drop in oil prices, the Kremlin also recently cut off economic relations with historic trade partners Ukraine and Turkey. Instead, Russia has begun to offer special trade privileges to Iran.

After meeting with his Iranian counterpart, the Russian minister of agriculture emphasized this new economic interest, stating that, “We need to establish modern logistics [for transportation] of Iranian goods to Russia, to create a ‘green corridor’ on the Russian border for Iranian goods and to ease customs formalities to speed up clearance of Iranian cargoes.” Iranian businessmen may even begin to receive the same tariff-free privileges that are offered to the members of the Kremlin-backed Eurasian Customs Union.

In another effort to foster an economic relationship, Russia organized the largest business exhibition in the history of the countries’ bilateral relations during December 2015. Representatives from over eighty leading Russian companies from defense, energy, and other industries attended the conference in Iran. According to Iranian Press TV, Russian Energy Minister Alexander Novak attended the event and referred to Tehran as Moscow’s “most important economic and trade partner,” adding that the two countries have devised a new trade bundle worth $35 to $40 billion.

The largest element of this package is the agreement that the Russian company Rosatom will construct a new nuclear power plant in Bushehr, Iran, an agreement worth $11 billion. The package also reportedly includes Russian produced satellite-operation equipment and Sukhoi-100 passenger jets, which are jointly worth $21 billion.

A significant part of other recent economic agreements between the two states have related to the defense sector. Months before the nuclear agreement was signed, Moscow resumed its 2007 agreement to deliver five S-300 missile systems to Iran. It had previously reneged on this agreement after the adoption of the United Nations Security Council arms embargo against Iran in 2010. Iran is also planning to purchaseRussian Sukhoi-30 fighter jets, which are similar to the American F-15E fighter bomber.

However, the current spate of economic activity between the two states belies the considerable friction that remains between the two countries. When Moscow withheld delivery of the S-300 systems, Tehran filed a lawsuit in International Court against Russia. Iran has agreed to drop the case, but only after Russia delivers the first regiment of the missile systems. Iran has also lost interest in purchasing Russian T90 battle tanks, since according to Ground Force Commander Ahmad Reza Pourdastan, “We were once interested in buying the Russian tanks. But since we can manufacture similar models within the country and we plan to do so in the near future, the deal is now off.”

Relations are further hindered by the fact that conservative and traditionalist Iranian politicians do not consider Russia to be a partner that can be trusted. Iran has a long track record of attacking foreign embassies on its soil, but the Russian diplomatic mission to Tehran is the only one that has been attacked multiple times. An angry mob first attacked the Russian embassy in Tehran in response to the Turkmenchay treaty that ended Russo-Persian war of 1826-1828.  The mob killed the ambassador, who played a key role in negotiating the treaty that had conceded control over the South Caucasus from Persian to the Russian empire. Even today, many Iranians use the term Turkmenchay Treaty to refer to an unfair settlement.

Iranians also attacked the Soviet embassy over a century later in 1988 during the Iran-Iraq war, responding to the Soviet army provision of missiles to Saddam Hussein. Moreover, Iran’s religious leaders found the communists’ atheistic views incompatible with Islam. Soviet intervention in Afghanistan only made matters worse, since the move drove almost a million Afghan refugees to relocate to Iran.

It took the collapse of the Soviet Union for comparatively warm relations to develop between Moscow and Tehran. Shared political animosity against the West and joint support for Assad has brought Russia and Iran closer together. Russia also played a constructive role during Iran’s nuclear negotiations, making no attempts to compromise the negotiation process and helping Iran facilitate the terms of the agreement. On  December 28,  the Russian ship Mikhail Dudin carried 11,000 kilograms of low-enriched uranium material from Iran to Russia via Caspian Sea in order to fulfill one of the key provisions of the nuclear agreement, since Iran could not dilute the uranium domestically. In turn, sanctions relief made Iran a more attractive economic partner, as Iran received $56 billion in unfrozen foreign assets and set the country on a new path towards economic rehabilitation.

Now, Russia wants to convert its recently developed political friendship with Iran into economic benefits. An expert on Iran at the Moscow-based PIR Center think tank, Andrei Baklitskly, explained that, “There is a feeling in Russia that, “We’ve been your friends for all this time and now you should give something to your friends.” However, other experts believe that Russia has already missed its opportunity for a sturdy economic partnership. Prominent Russian expert on Iran Rajab Safarovcommented that, “Prior to sanctions relief Russia could be a real queen in Iran, since at the time there was no one else and Iranians were ready to let Russians into their projects without competition.” Now, Iranians may be more discerning since their diplomatic and economic options have widened.

Many Russian economists have also expressed concerns over Iran’s return to the international energy market and its consequences for Russia, a sector where Russia and Iran are natural competitors. Currently, Russia exports around 3.5 million barrels of oil per day to Europe and 988,000 barrels to China. Under sanctions, Iran supplied 992,000 barrels to China and none to Europe, but both numbers are expected to increase substantially through Iran’s post-sanctions oil exports. Considering that neither Europe nor China’s energy market is likely to grow significantly in the near future, Iran’s reentry into the field will shrink Russian shares in both markets.

Tehran has offered a $6.55 discount on oil for European customers in an attempt to regain its share of the market. And in China, Iran has already made considerable headway: during Chinese President Xi Jinping’s official visit to Iran, both sides agreed to increase the bilateral trade tenfold to $600 billion in the next decade. Right after, President Rouhani left for a four-day tour of Europe, where he spoke about a “New Spring” in the relations with the European Union. President Rouhani returned to Iran with dozens of new contracts and memorandums that will help promote Iran’s return to the international market.

Between signing of the JCPOA in July 2015 and lifting of the sanctions in January 2016, Moscow had a special window of opportunity to gain economic benefits from its politico-military friendship with Tehran that may bear fruit in the future. But in return, Russia must now prepare itself for competition: Russia will compete with Iran in the international energy markets while also competing with European, Chinese, and American investors for a slice of the newly opened Iranian market. This will be an especially challenging task in light of the domestic economic challenges that Russia currently faces, but the payoff may be worth it.