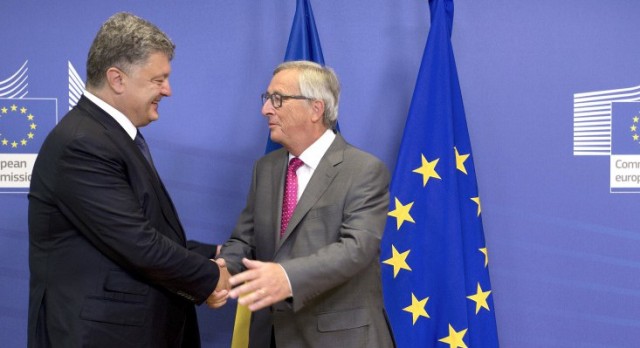 The EU-Ukraine arrangement on a free trade zone finally came into effect on January 1st 2016, following eight years of negotiations. Two years ago, hundreds of thousands of citizens went out on the streets in Ukraine to protest against then President Viktor Yanukovych, as he refused to sign the Deep and Comprehensive Free Trade Agreement with the European Union in November 2013. The ensuing ouster of Kremlin-backed president Yanukovych and Russia’s subsequent military intervention in eastern Ukraine changed the post-Soviet space’s fundamental geopolitical dynamics. Now, what does the FTA with the EU promise the Ukrainian economy and how could it impact the region?

Since Soviet times the Ukrainian economy was well integrated with the Russian one, so it will be a lengthy and challenging process for Ukraine to re-orient into the European market. However, there are several factors that will help smooth this transition. According to official statistical datafrom Ukraine, more than 30 per cent of the country’s exports are already going to Europe. Additionally, bilateral trade between Russia and Ukraine has dropped from 50.6 billion US dollars in 2011 to just $13 billion in 2015, according to Russian government statistics. For the past several years, Ukrainian businesses have already been adjusting their production quality to European standards, in expectation of the specified agreement.

The EU market is the most demanding in terms of quality and standards, so establishment of new quality control measures is going to be Ukrainian producers’ main challenge. Nonetheless, according to the Institute for Economic Research and Policy Consulting, 71 per cent of Ukrainian businesses are expecting to make a profit from the FTA within the next five years. Aside from new quality control measures and open competition with well-established European companies, the new trade agreement offers Ukraine preferential access to the biggest consumer market in the world with over 500 million customers.

In the near future, Ukraine has more potential to compete in light industries and especially the agricultural sector. Ukrainians were responsible for one-fourth of all agricultural products in the Soviet Union. Even the Ukrainian flag’s colours can be attributed to agricultural landscapes: fields of golden grain under a blue sky. In order to modernise and strengthen the agro-food sector in Ukraine, the European Investment Bank allocated a EUR 400 million loan to the country in December 2015.

Modernisation of production facilities and upgrading to European standards could present Kyiv new opportunities in the CIS markets, where Ukraine also enjoys tariff free privileges. In 2011, Ukraine signed a Free Trade Agreement with seven other Commonwealth of Independent States countries: Armenia, Belarus, Kazakhstan, Kyrgyzstan, Moldova, Russia and Tajikistan. Normally, any country can partake in several agreements on free trade. For example, Canada is a cosignatory of 12 FTAs.

However, Russia is intent on challenging Ukraine’s new government via every possible means. As of January 1st, 2015, Moscow extended its sanctions against the EU onto Ukraine. During negotiations in Brussels, Russian Prime Minister Dmitry Medvedev commented that Kyiv cannot be a member of two free trade zones at the same time. Moscow’s position is that Kyiv should lose its preferential status within the CIS, as it signs an agreement with the EU.

So far, no other country in the CIS region has joined Russian trade embargos on Ukrainian products. Back in 2013, Russian presidential adviser Sergey Glazyev said that members of the Eurasian Economic Union (EEU) will be forced to make customs procedures more severe for Ukraine and may withdraw from a free trade area with the country if Kyiv signs the agreement with EU. However, even Belarus and Kazakhstan, original co-signatories of the EEU, have decided to continue their free trade arrangements with Ukraine.

After meeting with her Kazakh counterparts, a representative of the Ukrainian Ministry of Finance mentioned that they reached agreements about mutual co-operation to manufacture goods in Ukraine for European markets and in Kazakhstan for Central Asian ones. Belarusian President Lukashenka has also expressed some concerns about European goods imported to Belarus evading tariffs under the new arrangement. Currently, Ukraine and Belarus are working on creating an automated intelligent video surveillance system for goods and vehicles moved though the Ukrainian-Belarusian border.

During their last round of meetings, Eurasian Economic Union member states decided to observe the consequences of Ukraine’s new arrangement with the EU and come up with a response plan over the next six months. For now, Russia is creating challenges even for the transit of Ukrainian products through its territory, which is going to increase the price of Ukrainian goods in destination markets.

On January 4th, 2016, the Minister of Economic Development of Ukraine said they will file a complaint to the World Trade Organisation and described the new restrictive measures by the Russian Federation as “non-transparent, unjustified and discriminatory.” Kyiv is also looking for alternative ways to Asia that bypass Russia. One of the options is the Trans-Caspian route: through Ukraine, Georgia, Azerbaijan, Kazakhstan and China. The first test container train on this route will depart from Odesa on January 15th.

Kyiv’s arrangement on the free trade zone with the European Union started a new stage for the Ukrainian economy. However, there is more work ahead for both Ukrainian businesses and policy-makers to yield profit in this nascent setting. In the meantime, Ukraine will also help unfold some of the obscured political cards in the post-Soviet space. 2016 will be an interesting year for this vibrant region.